Understanding the physics of pure and doped transition-metal oxides (TMOs), in order to have reliable predictions of their ground and excited states, represents a major challenge in fundamental and applied research today. The main difficulty for an ab initio description of the TMO wave functions stems from the partly localized character of their 3d-electron states, which often leads to deep interplays of charge, spin, and orbital degrees of freedom. For this reason, density functional theory (DFT), within its traditional functionals, fails to describe their electronic and magnetic properties, as Kohn-Sham wave functions are too delocalized. In order to overcome such a drawback, alternative schemes like hybrid functionals, SIC, and local density approximation (LDA) + U have been used in recent years. The recent discovery of room temperature ferromagnetism in transition metal (TM)-doped TiO2 has triggered an enormous experimental and theoretical effort to understand the magnetic properties of a class of compounds (TiO2, ZnO, SnO) that shows correlation effects when doped with TM impurities. Though F-center exchange is often invoked to justify ferromagnetism in these and analogous systems, recent ab-initio calculations point to its exclusion, so that the actual physical mechanism remains an open question. 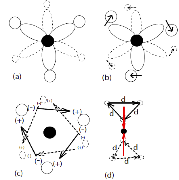 Resonant x-ray diffraction (RXD) is one of the names usually given for x-ray diffraction when the incoming photon energy is tuned around the absorption edge of an atom in the sample. In this case, an abrupt variation of the cross-section is recorded, as a function of the incoming photon energy. This technique has proved to be extremely useful in the last 14 years for the detection of long-range order phenomena, such as orbital and charge ordering in manganites and magnetite, toroidal order parameters in multiferroics or exotic magnetic order parameters in actinides. All these exotic multipolar order-parameters can be defined in terms of the multipole expansion of the full electromagnetic field.Multipole expansion of electric and magnetic fields generated by a system of fixed charges and permanent currents is a widely used tool to characterize the electromagnetic state of a material. In this framework it is possible to express the electric and magnetic fields generated by such a material in terms of the corresponding multipolar fields and also to write down the total electromagnetic energy in terms of such multipoles. Usually, such an approach is well known in the case of electrostatics. However, it can also be applied to the case of the parity and time-reversal odd multipoles that are nowadays in fashion as representative order parameters in, e.g., multiferroic systems. For example the Figure on the right represents a possible visualization for the mechanism of formation of an axial toroidal quadrupole in corundum systems like α-Fe2O3 or V2O3. The full circle represents the V ion and the empty ones represent the six surrounding oxygens. In order to visualize the oxygen octahedron, 4p-like orbitals are depicted in (a) and (b). Black arrows in (c) and (d) represent electric dipoles. Dashed objects lie below the V-ion plane.